How 'Bout That Snow? The Longest Ski Season In A Decade 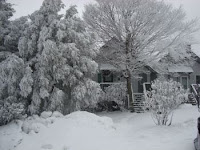 Well, the word is that Beech Mountain Resort is expecting as much as 40 (Yes, that is Forty, as in Four-O.) more inches of snow on Beech Mountain this weekend! And this after at least two Blizzards in the past month! Of course, this is Weather in N.C. we're talkin' about here; so it could be "as little as 14 inches." (But since when has 14 inches of snow qualified as a "little?") Since their early opening dates at the beginning of December, most ski resorts in the area have been predicting the 2009/10 Ski Season to be the longest we have seen for a decade! Thank you, El Nino!

Even if the locals are suffering from aggravated cases of cabin fever by now, this is nothing but good news for avid skiers and other snow sports enthusiasts. Appalachian Ski Mountain resort has already announced that they plan to extend their ski season through Easter weekend. Although, Beech Mountain Resort and the others are not choosing to make such bold announcements, the mood is very optimistic that we will all have enough snowfall for quite a few weekends more.