Five Out of Five Dorothy's Agree: There's No Place Like Beech Mountain! 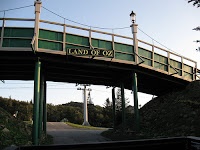 Beech Mountain, NC, was home to the original Land of Oz Park from 1970 until it closed more than 20 years ago.   But for one weekend every Fall, lovers of OZ and the old theme park gather at its grounds on the top of Beech Mountain, to re-live happy memories and the magic of OZ.  And this year, on August 5-7, the park will come alive one other weekend, as members of The International Wizard of Oz Club will hold their National Oz Convention in nearby Banner Elk.

The OZ Club was founded in 1957 by a 13 year old boy, and has since grown into a 501(c)3 educational organization with a growing number of members from all over the world, united by a love of all things OZ.

Convention attendees will enjoy documentaries, exhibits, members of the original costumed cast and live performances of songs from the early shows, as well as opportunities to show off their own collections of memorabilia and collectibles. Members will later follow the Yellow Brick Road during a private, behind-the scenes tour of the Park’s collection of original artifacts – including screen-used costumes from the classic MGM film.

So slip on your ruby slippers, grab Toto, and join the fun!  Further details about the event may be found online at the International Wizard of OZ Club site.